On June 14 the Business Roundtable’s CEO Economic Outlook Surveywas released for the 2nd quarter.  The June Duke/CFO Magazine Global Business Outlook Survey was released on June 8.  Both contain a variety of statistics regarding how executives view business and economic conditions.

In the CEO survey, of particular interest is the CEO Economic Outlook Index, which decreased to 109.9 from 113 in the 1st quarter.  Also stated in the report, "In terms of the overall U.S. economy, member CEOs estimate real GDP will grow by 2.8 percent in 2011, a slight decrease from the 2.9 percent projected in the first quarter of 2011."

As well, "“Fully 87% of our CEOs anticipate higher sales,” said Ivan G. Seidenberg, Chairman of Business Roundtable and Chairman and CEO of Verizon Communications. “As a result, more than half of our CEOs plan to increase both capital spending and U.S. hiring.  This continues a positive trend for our companies’ activity heading into the second half of 2011.”"

In the CFO Survey, "Optimism among chief financial officers in the U.S. has fallen, but spending plans indicate continued moderate growth over the next year."

Also, with regard to hiring, "U.S. companies expect domestic employment to increase by 0.7 percent over the next year.This rate of growth is down from last quarter and implies that, over the next year, the U.S. economy will average fewer than 100,000 new jobs created each month."

The CFO survey contains the Optimism Index chart, showing U.S. Optimism (with regard to the economy) at 57, as seen below: 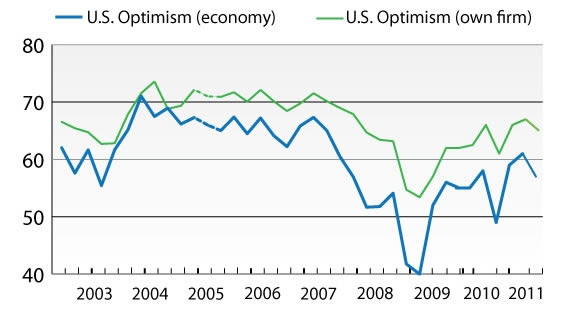 It should be interesting to see how well the CEOs and CFOs predict business and economic conditions going forward.   I discussed various aspects of this, and the importance of these predictions, in the July 9 2010 post titled "The Business Environment".

I post various economic forecasts because I believe they should be carefully monitored.  However, as those familiar with this blog are aware, I do not agree with many of the consensus estimates and much of the commentary in these forecast surveys.
_____