In previous posts I have discussed the Bond Bubble and its many facets.

Since my last post on the Bond Bubble (the July 25, 2012 post titled "The Bond Bubble – July 2012 Update") yields of various Treasury maturities have started to increase.

(click on chart to enlarge image)(chart courtesy of StockCharts.com; chart creation and annotation by the author) 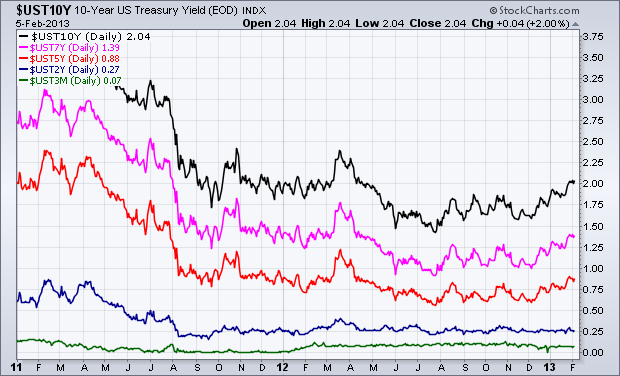 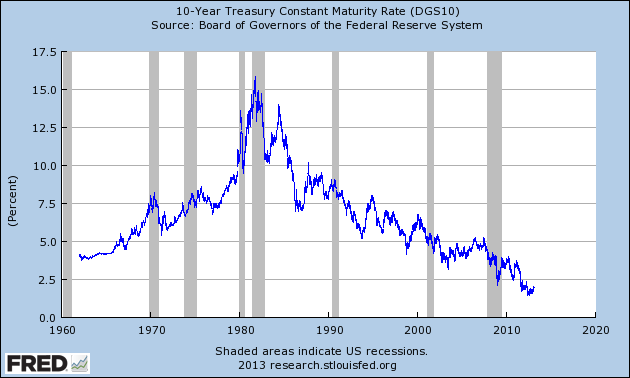 In fact, even if one takes a view of interest rates from 1790-2011, one can see that the current era of ultra-low interest rates is very much anomalous.  While this era's ultra-low rates are not necessarily "proof" of an asset bubble in bonds, other characteristics, including those discussed in previous posts, very much indicate that a truly enormous bond bubble exists.

While the duration of this "bull market" in bonds is outsized - and thus gives the appearance that ultra-low rates are not only normal - but such yields will remain depressed indefinitely - as with any asset bubble such seeming stability will prove illusory.  In fact, there are already various indications that the bond market bubble has seen its zenith.

What is particularly fearsome with regard to the bond bubble is its potential for damage once it "pops."

The perils of this bond bubble and its future “bursting” can hardly be overstated.  As I mentioned in the April 6, 2010 post ("The Threat Of Rising Interest Rates") :

Falling interest rates over the last 20 years have been an “enabler” of much of our current day economy.

As well, there remains the critical question that I mentioned in the October 4, 2010 post (titled "Thoughts On The Bond Bubble") with regard to what the "natural" interest rate is:

While I have not spent considerable effort trying to ascertain the level of this "natural" interest rate, I have little doubt that such a "natural" rate on the 10-Year Treasury would be at least 5%-10% and most likely considerably higher (possibly multiples thereof).  Of course, such rates would have massive implications on a number of fronts.